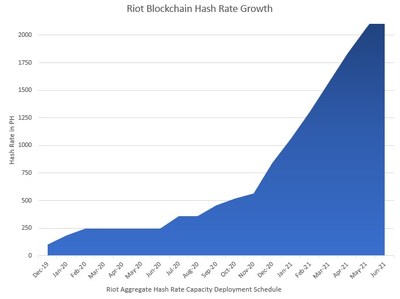 As part of Riot's focus on the transformational expansion of its mining operations, it has opted to take advantage of new S19 Pro production capacity from its partner Bitmain by purchasing these 2,500 additional S19 Pro miners, with delivery scheduled to occur before the end of the year. With this purchase, the Company expects to reach 842 PH/s in operational hash rate with 9,540 miners deployed by late December 2020. This represents an increase of approximately 50% over Riot's previous estimate of its deployed hash rate as of the end of 2020.

Combined with the previously disclosed purchases of Bitmain S19 Pro Antminers, the Company now expects to achieve a total hash rate capacity of 2.3 EH/s by June 2021, with 22,640 total miners deployed. As far as the Company is aware, no other publicly traded bitcoin mining company has disclosed a hashing capacity exceeding 2 EH/s.

In line with the Company's previously announced purchase of 13,100 S19 Pro Antminers from Bitmain, Riot expects to receive and deploy new miners every month starting this month and continuing through June 2021. When completed and combined with the Company's existing fleet, the Company expects to have 22,640 miners deployed, the vast majority being the next-generation S19 Pro miners.

June 2020 – 1,000 S19 Pro miners (110 TH/s) were purchased from Bitmain, as of today over half of this order has been received and deployed with the balance expected to be received by late October 2020.

At full deployment, Riot expects to achieve 2.3 EH/s of total hash rate capacity by utilizing 73 megawatts of energy. This would result in Riot having an overall operational efficiency of approximately 32.33 ±% 5 joules per terahash (J/TH).

All the new miner purchases continue to be funded using available working capital.  Riot continues to maintain no long-term debt. The Company is continuing to assess the bitcoin landscape with the assistance of XMS Capital to evaluate opportunities to further increase shareholder value.

Additionally, Riot has taken delivery of 563 of the 1,000 S19-Pros it previously purchased and announced on June 3, 2020. Deployment is complete at Coinmint LLC's Massena, NY, which brings the Company's deployed hash rate capacity to 519 PH/s, an increase of 14% from the September hashrate.

As previously disclosed, the Company relocated its entire fleet of Antminers to Coinmint in Q3 2020 as part of a new hosting partnership and has significantly reduced energy and operational costs as a result.

Coinmint operates a digital currency data center in Massena, New York. At 435MW of transformer capacity at its Massena complex, the facility's capacity is three times larger than any other known operating digital currency data center in North America. The facility has been operational since May 2018. Given the abundance of hydroelectric and wind power generation in the area, the experience of its management team in wholesale electricity markets, and the large capacity, Coinmint has a material electrical economic advantage over other operations. For more information, visit www.coinmint.one.