In line with Riot's goal of miner expansion, and together with Bitmain's increased production capacity during early 2021, this purchase and the recently disclosed order of 8,000 S19 Pros, results in 13,100 miners scheduled to be received and deployed in the first half of 2021. As a result of this order size, the Company was able to secure advantageous pricing per unit on both this order and the recent order of 8,000 S19 Pro miners. The additional volume discount provided by Bitmain reduced the previously announced purchase price for the 8,000 S19 Pros from $17.7 million to $17.5 million.

As far as the Company is aware, no other publicly traded bitcoin mining company has disclosed a hashing capacity exceeding 2 EH/s. Riot anticipates that based upon current factors, Riot would achieve positive cash flow in late 2020 when the Company's total hashing capacity is expected to reach 566 PH/s. With the full deployment of these 13,100 S19 Pros, Riot is expected to more than triple that hash rate capacity by the end of June 2021.

"Riot has made a commitment to being a global player in the bitcoin mining sector," said Remo Mancini, Independent Chairman of Riot Blockchain. "We are believers in bitcoin's opportunity to be a disruptive force in the traditional finance and currency systems. Riot is making strides in positioning itself to be a part of that future, and this purchase is a hallmark of those efforts."

At full deployment of 20,140 next-generation miners, Riot estimates its total operational hash rate capacity will be 2.007 EH/s (2,007 PH/s) with the Company's aggregate mining efficiency of 32.65±% 5 joules per terahash (J/TH), consuming 64 MW of power.  Riot expects to then have a fully deployed fleet totaling approximately 20,140 miners, the vast majority being the next-generation S19 Pro Antminer from Bitmain. 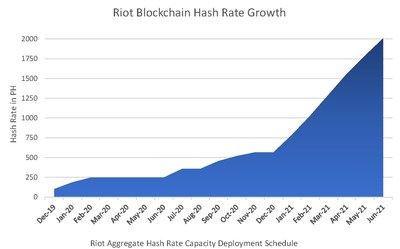 All of the new miner purchases continue to be funded using available working capital.  Riot continues to maintain no long-term debt. The Company is continuing to assess the bitcoin landscape with the assistance of XMS Capital to evaluate opportunities to further increase shareholder value.

The Company's on-hand fleet of miners are deployed at Coinmint LLC's Massena, NY facility. Coinmint is a valued partner of Riot as both companies are diligently working to increase North America's presence in the bitcoin mining landscape. The Coinmint facility draws a significant portion of its energy from hydroelectric sources and the annual average power generation cost has been approximately 1.5 cents per kWh.  A majority of bitcoin mining currently takes place overseas, however, recent industry announcements reflect a potential shift in network hash rate to North America. Riot views increasing the North American aggregate hash rate of strategic importance.

"Our partnership with Riot has allowed us to add a significant number of new tech jobs in the region," said Ashton Soniat, CEO of Coinmint. "Coinmint currently operates the largest and lowest-cost cryptocurrency mining facility in the U.S., and we are continuing to expand to meet the needs of our institutional partners like Riot."

Coinmint operates a digital currency data center in Massena, New York. At 435MW of transformer capacity at its Massena complex, the facility's capacity is three times larger than any other known operating digital currency data center in North America. The facility has been operational since May 2018. Given the abundance of hydroelectric and wind power generation in the area, the experience of its management team in wholesale electricity markets, and the large capacity, Coinmint has a material electrical economic advantage over other operations. For more information, visit www.coinmint.one.